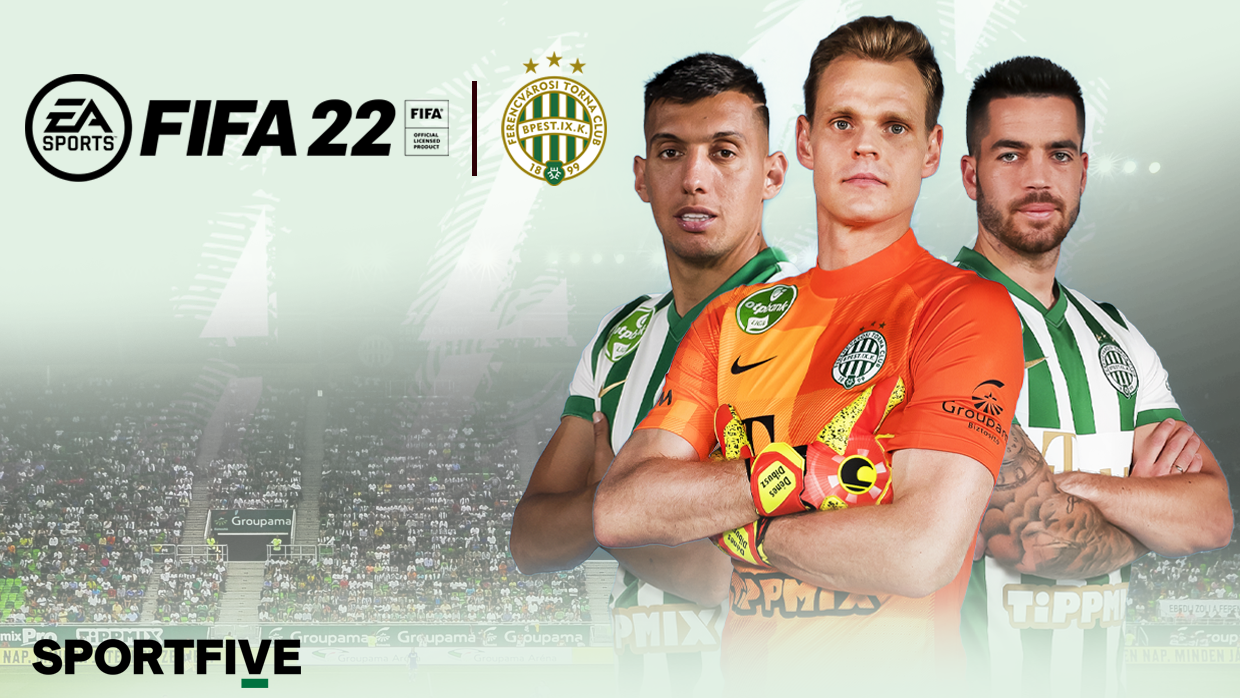 Fradi in EA SPORTS FIFA 22 as first Hungarian club
Ferencváros will be part of the popular FIFA video game series for the next years.

Ferencvárosi Torna Club will be the first Hungarian club to feature in the popular video game series and its latest edition, FIFA 22, which will be released October 1st 2021. With two Europa League and one Champions League group stage participation in the last three years, from now on it is not only head coach Peter Stöger, but also fans who can control the fate of the club: Dibusz, Botka, Tokmac and Uzuni will not only become the role models of the youngest Fradi fans at the Groupama Arena, but also on the television and computer screens. Matches in the virtual reality will create lifelong friendships and allow fans to play the biggest derbies of recent years.

With 17,000+ players across 700+ teams in more than 90 stadiums and over 30 leagues, FIFA 22 brings unrivaled authenticity through its stadium, player, club and league partnerships which represent the most comprehensive interactive football experience available. FIFA 22 is the only place you can play in iconic competitions such as UEFA Champions League, UEFA Europa League, brand new UEFA Europa Conference League, Premier League, Bundesliga, LaLiga Santander, CONMEBOL Libertadores and CONMEBOL Sudamericana.
Powered by new HyperMotion technology, FIFA 22 also combines Advanced 11v11 Match Capture and proprietary machine learning technology to deliver the most realistic, fluid and responsive football experience for next-gen consoles and Stadia, unlocking the raw emotion, passion and physicality of the world’s game.

- Being part of FIFA 22 is another milestone and a great success for Ferencvárosi Torna Club, the result of our performance both on and outside of the pitch. It feels great to be the first ones among all Hungarian clubs - states Pál Orosz, CEO of FTC Football Ltd. - It is the acknowledgement of the history of Fradi and the decade-long teamwork under the presidency of Gábor Kubatov. In FIFA 22, Ferencváros will represent Hungary as the only club. We aim to bring the youngest generations closer to FTC and to the club, to increase the awareness around Ferencváros and its values both in the domestic space and globally.

- It is an honor and great achievement for Sportfive Hungary to facilitate this agreement between FTC and EA SPORTS - said András Igaz, Managing Director of Sportfive Hungary, the comprehensive sports marketing agency of FTC. - We are proud that besides the results of Ferencváros, we could utilize the global network of Sportfive to make Ferencváros the first club in Hungary to step into the virtual football world. We hope that with this partnership we can take another step towards broadening the supporter experiences from single matchdays to a 365-supporter experience. We also hope that in the near future, we can help the club with other innovative solutions and partnerships to make it even more successful and popular both in Hungary and internationally.